‘Europe needs to be united, even Germany can’t cope alone’ – The global struggle for technology supremacy lifts industrial policy to the core of the EU 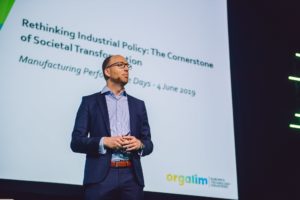 Malte Lohan, the Director General of Orgalim, calls for a united Europe in the global struggle for technology supremacy. Photo: Akifoto, DIMECC Ltd

Europe’s most important industry strongly pursues a united Europe. ‘Industrial policy is back. The international power struggle by the US and China has put also Europe in a position, where only strong united answers can work. This lifts also industrial policy to the core of the EU and there’s much to be done’, states Malte Lohan, Director General of Orgalim, the representative of Europe’s technology industries at EU level. Lohan spoke today at MPD, the largest and most important industry event in Finland, held in Tampere.

When Orgalim talks, the EU generally listens. At least it should, since Orgalim represents 11 million direct jobs and 2000 billion euros of turnover, the equivalent of France’s GDP. Malte Lohan is the operative head of Orgalim as Director General, and he has a strong message to all leaders of Europe.

‘Europe needs to be united. No company or country can manage by itself. Even Germany can’t cope alone’, underlines Lohan. Lohan sees Europe as a global industrial leader in the long-term, which is only made possible with bold new decisions and a new attitude.

‘Our vision for 2030 calls for embracing innovation-lead transformation. At the moment, we’re not embracing change. We’re far too worried about risks when we should be grasping new opportunities like the 5G with both hands”, Lohan urges.

Innovation is the key

Europe can only ensure its global industrial leadership with major investments in innovation, and an attitude to enable innovation.

‘We need to transform technological, societal and environmental challenges into the drivers of the future. That includes reframing technology as a positive set of possibilities instead of a threat. People must be brought into the core’, defines Lohan some major building blocks of the desirable European future.

‘We totally support the message of Orgalim and look forward to seeing how the new Government Programme transforms this into practice. The Finnish industry has offered to open innovation to everyone willing and able, through the initiative P4.0. There have already been three P’s in the public private partnership innovation model, the fourth P stands for people. We offer inclusive and the most effective innovation in Europe and hope the Government appreciates that’, states Harri Kulmala, CEO of DIMECC Ltd, the most important innovation ecosystem of the Finnish industry.